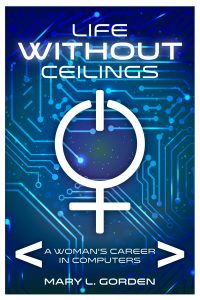 Almost exactly three years ago I wrote the first words of what was to become Life Without Ceilings: A Woman’s Career in Computers.  Today it is a published book.  Check it out on Amazon.

It has been a long, hard and educational three years. And in some ways I’m a different person than I was three years ago.  As I came to the end of my sixties and approached my seventies I was definitely slowing down.  I was getting stuck in my ways and I hadn’t done much new in the last several years.  That definitely changed.  It’s been a long time since I’ve worked so hard and what I’ve learned could fill a book.  Or at least be the subject of an article.

I’d been toying with the idea of writing a memoir for years. Initially I’d belonged to a Memoir Group that met monthly and shared stories.  More recently I’d been taking a weekly “Memories to Memoirs” class.  The classwork added to my stack of stories but I had no idea how to organize them into a book.

Then two things happened.  The first was finding out that our teacher had an unpublished novel in her desk.  It preceded the novel she published.  The take away was that sometimes you have to write something to learn how to do it.  The second was I watched a program on PBS called 56-Up.  It was the latest installment of a project that had been going on for a half century.  The project was to interview a series of people every seven years, starting in the year they were seven.  The show I saw was about the participants at age 56.

I now had a way forward. I would write my story in seven year increments and in the process learn how to write a book.  Ah, the bliss of ignorance.

The first thing to go was my idea that I would only include what I knew at the time of the story. The results were universally panned by the friends and family that I could get to read my early drafts.  Finally I gave in and began to write the story using all of my adult knowledge.  Then there was the quality of my writing.  My first critique group was the “Memories to Memoirs” class but our teacher had a firm rule.  No negative comments were allowed.  Others weren’t so restrained.  I remember one comment about a sentence being the most incredibly bad sentence ever seen.  The sentence did stay in the book for a long time, but eventually went away.  Slowly I got better.

My initial estimate was that I could finish the book in about eight months. But it was slow going; partially because it wasn’t a priority.  In July 2014 I let a friend talk me into making my work-in-progress her book club selection for November.  I now had a much needed first deadline and demonstrated that I could write a lot more than I had been doing.  Fortunately all of the book club members were good friends of mine and all of them dutifully read at least part of my slightly polished first draft.  We shared memories about our earlier lives rather than talking about the book.

I learned two things writing the first draft. The every seven years structure didn’t add to the story and had to be removed.  And there were things that were not in the first draft that needed to be in the story.  They weren’t in because I ran out of time.  So there had to be a second draft.  And in that second draft I could clean up some awful sentences.  How long could that take?

I found another resource as I started the second draft. It turned out that one of my friends had an MFA and knew a lot about writing stories.  We spent months working together on the rewrite of the first part of my story.  I used what I learned to redo the rest of the book.  My friend also insisted that I needed to read more memoirs.  Studying published books in your genre was part of the education process.  The only recreational reading I was allowed in 2015 was book club selections.  All of the other reading I did that year was either memoirs or books on how to write.

Not only was I learning how to write, I was feeling comfortable doing it. As I rewrote sections I was appalled by some of my early writing.  And, more importantly, I knew how to fix things.  I struggled for a while with the organization of the story.  My story had the recommended three acts and it just didn’t work.  When I split the second act into two parts I had a story that hung together.  I was learning my craft.

The second draft was finished in early November 2015.  I knew it still needed polishing but it was much better than the first draft.

While a number of people had read sections of the first draft the only person who read the whole document was my sister Pat. Her comment was just what I needed.  “This is really good and you are a good writer. I’m sure I would have still found it interesting even if we weren’t related.”  I was now at a crossroads.  I had a book that was ready to be a family story.  Did I want to take it to the next step?

The fork in the road

Was there a market for my book? One of the things I had learned in late 2015 was that Women in Technology was a hot topic.  When I had retired in 2001 I thought the question of whether or not women belonged in technology was a settled topic.  I’d watched the percentage of women in computing grow over the course of my career and the number of women in computer management had also increased dramatically.  But in the 21st century things had changed and not for the better.  The number of women in the computer field had declined and apparently that decline had started before I retired.  Could I use my book to help mentor younger women still struggling to succeed in computing?

The first thing I had to do was get a professional review of my book. As 2015 was turning into 2016 I was struggling to figure out how to do that without spending a small fortune.  Finally I discovered a whole new job category – a writing coach.  This led me to a professional who would make reading my book a priority for a price I could afford.

And the answer was good. Yes this was more than just a family story.  But there was a lot of work still to do.  I don’t think there was a page in the document that didn’t have marks on it.  Some of those marks were “just” typos but whole sections needed rewriting.  Many areas needed more detail.  I had a busy couple of months but by late April, I was ready to turn the revised document over to beta readers.

In mid-October 2015 I was introduced to the topic of publishing. So while I was looking for a writing coach I was also researching how to get my book published.  In a nutshell the choice came down to timing.

If I went with a regular publisher it would take me a while to find one and publisher schedules have long lead times.  I could easily be looking at late 2017 before my book was published.  If I self-published, I could get it published in late 2016.  It would cost me money up front but I’d make more with the sale of each book.  As near as I could tell, the marketing of the book would be mostly my responsibility regardless of how I published.

So I chose to self-publish.  I created my own publishing company and hired people who had published books before to help me.  That process is another story to be recounted someday.

Check Life Without Ceilings on Amazon.

Please let me know of your experiences with writing or publishing or any other experience you wish to share by leaving a comment.