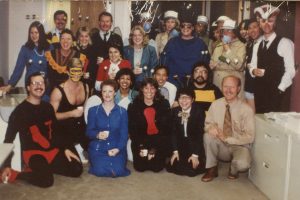 It is pretty well established that in the 1940s most, if not all, programmers were women. Hardware was the important part of computers and that field was dominated by men.  The programming part of the job was viewed as a minor clerical task.

Today, about seventy years later, the percentage of women programmers is small. Exact numbers seem hard to find.  According to an NPR article only about 18% of the Computer Science degrees earned today are earned by women.

Did something happen in the 1960s?

The answer to that question is a resounding “yes”. For those of you who don’t know the history of the 1960s I would recommend When Everything Changed: The Amazing Journey of American Women from 1960 to the Present by Susan Collins.

My own career mirrored the rise of the importance of women in computers during these turbulent decades of the 20th century. When I became a programmer in 1966 women programmers were in the minority.  In my group, there were no women programming supervisors.

By the early 1980s I had a significant number of women peers in computer management. My first woman boss was in 1989.  The picture at the top of this article from the mid-1980s on Halloween shows a group of programmers and their managers.  As you can see there was gender diversity in the group.

When I retired in 2001 I wasn’t aware of a decrease in the number of women in computing. I may have just not been paying attention as in the early 1990s I left management to return to the technical work that I loved.

Why did this happen?

And I have no theory about why the percentage of women receiving Computer Science degrees started to decrease in the 1980s. But I do know that a correct theory is unlikely to be developed if the increase in women programmers starting in the 1960s is ignored.

If you have enjoyed this post please share it with others using the buttons below. Please let me know your views about the history of women programmers by leaving a comment.